SONY MARKETING ERROR #17829
So, they've decided to release HOME as a public Beta. That's HOME, the amazing virtual world that had game journalists and PS3 fanboys proclaiming the greatness of Sony and how it would be the best thing EVER! Except, it's not. Two years on, it turns out to be a half empty, badly thought out mess (queuing to play a game of Pool?!) and clearly nothing more than a cynical attempt to actually make some money out of the cash-haemorraghing disaster that has been PS3. And with nothing on the horizon, save GT5, surely the 'nail in the coffin'. Even ThreeSpeech can't be arsed to Big It Up like they did with Little Big Planet (already being sold for £19.99) Let's have another little round-up of public opinion shall we; 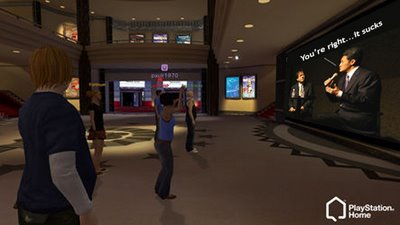 Fernando Mosqueira said...
4:07 Anonymous :
Show more respect : Capt. Jax was already auditing Employees of the Month for UKR at times when "Home" only meant for you the inner side your father's bollocks.
4:22 PM

Anonymous said...
£3.99 for a virtual house. Oh right, It's an investment, property always goes up.

That's phase one of the sony masterplan, when the value hits £100k and you struggle to get a mortgage (at the bank of Sony) for your piece of cyber tat we'll be looking into the abyss of another sub prime catastrophe.

Damn you evil Sony, we're not going to bite! Take your virtual house and shove it up your tush.
5:20 PM

Anonymous said...
Looks like the dumbfucks weren't even working all that hard. Oh dear, hacked to pieces already because it was thrown together by monkeys:

PhotoBoy said...
Yep, this truly was the year of the PS3:

I can't wait to see what Sony does next year (probably release another PS3 model with a slightly larger/smaller hard drive).
12:06 AM

“If you have some remainder of money laying around in your wallet, you may want to go and buy that cool pair of jeans that you love to rock in the real world so you can rock it in the world of PlayStation Home and really have that avatar represent you…"

Actual quote from the article. I think I just died a little.

Incidentally, as a PS3 owner (yes, yes, but I do still have my Dreamcast hooked up and have done now for 9 years solid) I tried to get into the beta today and was told the server was unavailable. Whether this had anything to do with my 'dear god home is dire' display message or whether I was just spared the endless ritual of shite that goes on in there (best example being every girl avatar being followed by 15 boys), I can't tell. So I fired up some Fallout (on the 360) instead. :-)
12:25 AM

Anonymous said...
"It’s still classified as a beta because it is a continuously evolving service"

So this crap isn't even Beta, they are just calling it Beta to cover up the fact that it's shite right now and they haven't figured out how in hell they are going to make it work properly, nice.

Maybe they should have called their console 'PS3 Beta' for the same reason.
3:23 AM

Anonymous said...
The best comment was over at EG. Someone said Home is simply a gay bar.
8:57 AM

Anonymous said...
How anyone could believe a variant of Second Life where you have no creative control of what is offered would be console seller really must be hardwired to the Sony Drip life support system. Fucking retards only need apply, it seems.

Michael Jackson's secret cellar said...
The only people that got excited by the prospect of HOME were those that have never tried something like this before. Everyone that had taken a look at SecondLife for 10 minutes knew how utterly pointless and soul destroying it would be.

Chatrooms are the anus of the Internet. MMOs are the ultimate con, pay to be a slave (you can do that in the real world too and have the bonus of a real person making you cum). Combine them but remove the game section (ie, 'The Fucking Point') and you are left with this. Why would anyone want to copy SecondLife? It's already clearly an abomination. From a business point of view it makes no sense either, no one that tries it comes back and practically no one spends any money in it. You can't base your business model on what a few nutters will pay for. Virtual jeans. Virtual tshirt. Real depression. All set in what looks like an airport with no prospect of flying somewhere to get away from the incessant advertising. "Hey dudes, let's hang out at Heathrow!"

SecondLife but infinitely worse. SL is already bad enough to induce profound misanthropy combined with black hopelessness within 6 minutes (I timed it).
1:46 PM

Anonymous said...
Home is utterly shit, but please don't include LBP in the sentence - it's brill.
3:35 PM

Anonymous said...
Home is utter shite. I got bored after 10 minutes, there is fuck all to do but walk around aimlessly and wait for things to load.

A completely soul crushing experience, when will Sony go back to full time game development?
4:40 PM

Anonymous said...
this is my favourite piece of fanboy brilliance!!

"Home is the stupidest idea ever. Instead of working on the functionality of PSN they spend years working on virtual lobby that only makes actual gaming harder. Sony need to stop worrying about presentation and start focusing on functionality. If PS3 owners would actually put there foot down instead of supporting EVERY stupid choice Sony makes maybe Sony would try harder."
7:50 PM

Apples and Oranges said...
"To be this good doesn't take AGES, it takes YONS to fuck up as well as Sony."

Anonymous said...
Now that UKP is dead where do all the cool kids go/lurk?
8:38 PM

Nothing good can come from something that started as "The Getaway Online" on PS2.
10:13 AM