Site updates cause mass panic
The games industry was left reeling today after the Thought-To-Be-Dead videogames website UK:Resistance was updated 5 times in one week. A shocked insider told us, "We thought Jon and Gary had given up but they've come back with all this, what's going on?" High ranking executives at Sony hastily called a board meeting to discuss the implications of the updates - allegedly believeing it signalled the imminent resurrection of the mighty Sega. A furious Sony boss is said to have ordered the PS3 be doubled in power to counter what was certain to be a secret Dreamcast successor in development. 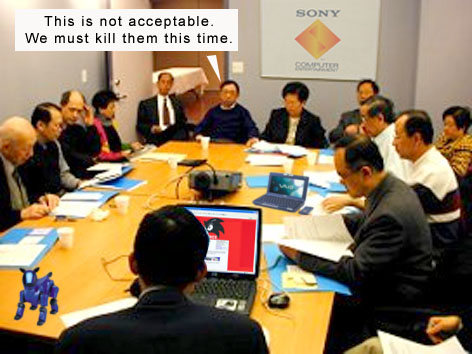 OTHER THINGS THAT AREN'T FUNNY ANY MORE
#6: Kieron Gillen

Posted by Cmdr_Zorg 4:08:00 PM 1 comments
EXCLUSIVE: SAMMY TO SELL SEGA - ON EBAY
Breaking news this morning from keen-eyed reader Richard Perrin, who seems to have spotted a bargain every Sega fan will want. "See the attached banner ad image, it blatantly gives away the shocking news that Sega Enterprises is to be sold on eBay for under £50!"

Own Sega for less than 50 quid. The ultimate collectible for any Sega fan.

Posted by Cmdr_Zorg 11:31:00 AM
RYO IS COMING!
We've got the scoop! Yu Suzuki's opus is set to conclude with 'Shenmue III - Ryo Goes West', to be released on Xbox later this year. In the continuing quest to avenge his daddy - Ryo travels to the UK and embarks on a nationwide adventure. Walking late at night on London's Hampstead Heath, Ryo meets Paulo, a fashion designer who offers to escort him on his trip and gives him some leather trousers to go with his jacket. The normally passive natured Ryo becomes more versatile as the game progresses and he has plenty of opportunity to discover the true power he wields in his fists. Together they visit locations like Manchester's Canal Street, and the cosmopolitan area of Soho in London, before a final epic scene of gang action in the dockyards of Portsmouth. 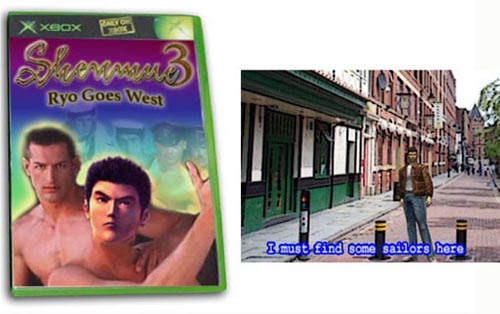 Posted by Capt_Jax 1:51:00 PM
SICK 'SLIMY TITS' SHOCK OF TOP XBOX GAME
Following yesterday's revelation about the sheer volume of breasts present in outstanding Xbox game Ninja Gaiden, we can now show the sick, dark underbelly of creators Team Ninja that festers behind this seemingly innocent creation. Beautiful heroine Rachel, 23, is DEGRADED by having DISGUSTING SLIME spewed over her by a monster -- purely for our sexual gratification -- in what must rank as one of gaming's most repulsive moments. Were we not precisely in the target demographic this sort of thing is aimed at, we'd be shocked.

Rachel (middle), with her tits (left and right) covered in monster slime of a POSSIBLY SEXUAL nature.

The slime also extends to her belly and, sickeningly, her upper thighs.
Posted by Cmdr_Zorg 5:42:00 PM
'BREAST MEN' AT TECMO REDEFINE VIDEO GAME TITS -- AGAIN! -- IN NINJA GAIDEN
They did it in Dead or Alive on the Saturn. They did it again in Dead or Alive 2 on Dreamcast. And Dead or Alive Xtreme Beach Volleyball marked the pinnacle of breast development in video games -- until now! Meet Rachel, spritual guru and confidant of Ryu in Tecmo's astonishing Ninja Gaiden. She has by far the largest and most splendidly self-supporting breasts yet programmed by develpment man. These are not movie clips, they are real-time Xbox-powered jubblies. N-joi.

Yes, that is quite difficult to believe.

Come back tomorrow to see more of Rachel -- soaked in mutant slime!
Posted by Cmdr_Zorg 3:40:00 PM
HOW TO EMAIL OR SEND US A THING
Have you found a thing we might like? That's GREAT NEWS, as it could save us having to despairingly trawl NewsNow at 11.55am trying to find something to do something about today. Thanks in advance.

METHOD A
If you know about computers and your email system is set up properly, you can click here to send us an email.

METHOD B
If you don't know about computers and nothing happens when you click on that link, or something WEIRD opens up you've never used before and don't like the look of, use this -

METHOD C (TBA)
We may at some point in the future put a mail form in here. But making ones that cope with attachments is a bit hard. And we are not good at being patient with PHP scripts.

UK:RESISTANCE ARCHIVES UP! GLORIOUS HISTORY RETURNS!
Web space has been purchased, files uploaded. Step back in time, back to an era before irony, back when things could actually be GOOD and enthusiasm wasn't only for the mildly retarded at dinner time. Marvel at HOW MUCH spare time was consumed!

Click here to view the original UKR Archive page, as last seen some time in early 2001. More pages and images will be uploaded over the coming days.

Or click here to cycle backwards through the last two years worth of "issue"-based updates. Which was about as good an idea as that logo.

Please email us if you have any particular requests/suggestions for Archive repairs, or to say if you think we should be getting a grant off the government for restoring this very important historical document.