SEGA SHOWS EXACTLY HOW SHIT SHADOW THE HEDGEHOG WILL BE
By making a flashgame about it. We hoped for a bit that this WAS Shadow the Hedgehog and that no more would be said about it ever again. 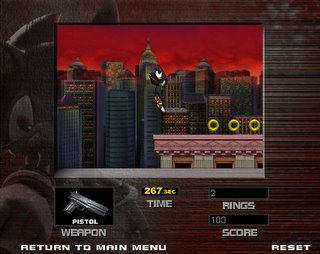 We just know this is a secret admission from Sega that they know EXACTLY how shit this game is, because everyone knows that flash games are UTTER SHIT. They're even offering a Shadow Beanie to people who are stupid enough to pre-order, it's like they're secretly talking to us and admitting they were wrong!

We didn't make this up! Torture yourself here if you don't believe us.