TO BE THIS GOOD TAKES AGES
It's easy to feel overwhelmed and hopeless in the face of the constant bombardment one experiences on the internet of gameplay movies featuring Japanese gamers finishing Super Mario in eight seconds with 99 lives left. Hooray, then, to mister Hyde who has just taken the Sega crown back for us white devils by beating Ultimate Dark Falz at level 1. 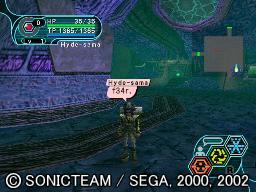 2) He boosts a level 1 character with all the best spells. Because Psycho Wand takes hit points, this ensures that every spell he casts creates sufficient knockback to kill him, meaning he never gets any experience points.

3) He plays through the entirety of PSO in this way, finally killing Falz on ultimate mode at level 1.

It took him, quite literally, years.

The time may have come to pack up your consoles for good, because unless you plan to complete NiGHTS using your parts of shame to operate the controller* then it's quite possible nobody will ever, ever be this good at Sega games again.


* Nobody connected with UK:R has ever tried this.**