RICHARD JACQUES -- THE MESSIAH?
A late night snack at UK:R HQ has resulted in an event of potentiallly biblical proportions. Whilst preparing several rounds of toast -- one of which was to have been coated with a yeast based extract, a member of staff noted what appeared to be an image of a male face on one partially burnt slice. Further examination revealed the face to be none other than the heralded Sega music producer Richard Jacques! We tried to call Richard to ask him if he is the Second Coming, but his phone kept ringing and going on to answerphone. So we tried again and the same thing happened. Then we tried again but it said the phone was switched off. Why does Richard's phone never work when we call him? 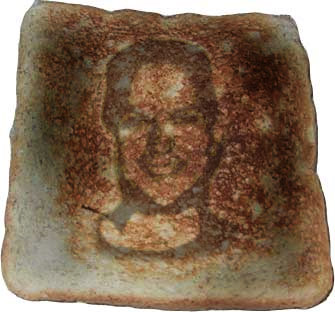