UK GAMES INDUSTRY - CANCELLED!
Over the past week, all the UK game industry events have been cancelled (except EGN but that doesn't count), leaving 15 year old gaming website "CEO's" to cry over their keyboards. But fear not, UK:Resistance will come to the rescue! We're planning UK:R - LIVE for later this year. Venue is to be announced (will have wheelchair access) but expect somewhere with a capacity for at least 45 people. Attractions include Girls Aloud (TBC) repeatedly performing 'Love Machine' throughout the day, a 'Retro' games section featuring linked Dreamcasts running Sega Rally 2 and exciting daily seminars. Gary will be holding a debate entitled Games Journalism - The Future, where the merits of the 'out of ten' scoring system will be extolled followed by a discussion about whether words are even needed in game reviews in the 21st century. Jon will be hosting a talk on the Saturn Virtua Fighter 3 conversion with hardware upgrade cart and how it could still be a viable product 7 years after it's shelved release. Stay tuned for further information regarding this spectactular event. 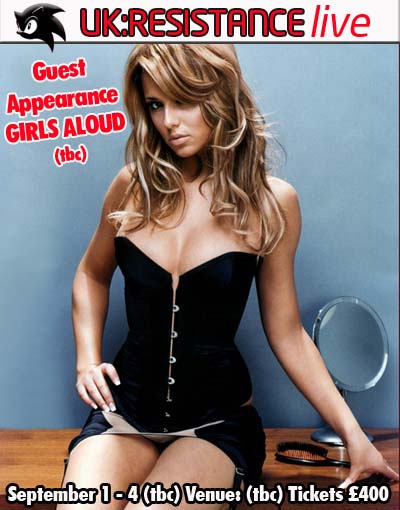 (NB. The European Cheese Tasting Seminar have asked us to point out they will be holding their annual event as usual at the Wisbech Conference centre)